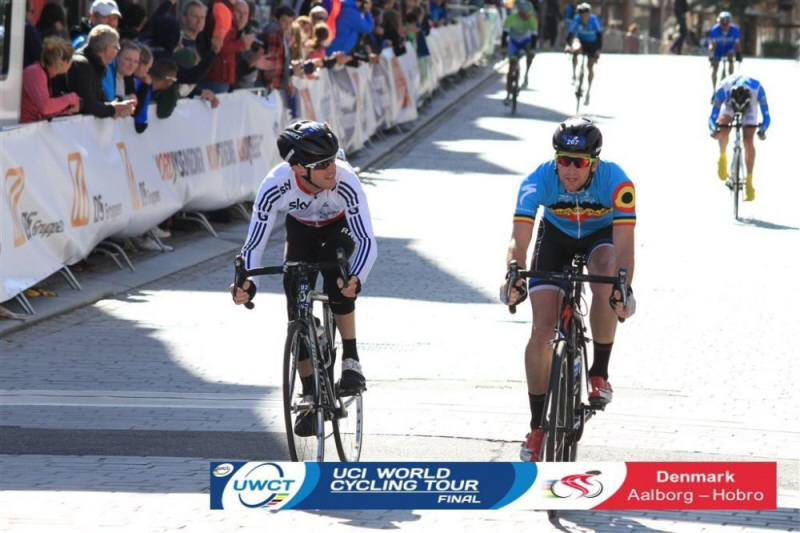 Bryan completed the 165 km (102.5 mile) course in 4 hours 38 minutes, averaging a speed of 22 mph and finishing 60th out of 129 riders, the fourth Brit in the bunch.  The race was won by French ex-professional and former Tour de France rider, Samuel Plouhinec.  Having only started road racing this year, Bryan was rightfully proud of his achievement.  Afterwards, Bryan described his race,

“It was tough.  The field was so strong and you had to be alert the whole time.  I got dropped into the second half of the peloton at the start, after almost colliding with a traffic island.  The strong crosswinds and incredible pace made it impossible to get back.  But I didn’t give up.  There was 1,200 m of climbing, so it wasn’t as flat as people expected.  I had time to recover my overall position.  I knew there were two short, steep climbs at around 85 km.  That’s where I attacked and I managed to get in a faster group.”

“Unfortunately, the crosswinds caught me out again.  I got isolated for 10 km before getting back with other riders, which cost me time.  Ultimately, I ended up in a group with five others, none of whom were in British jerseys.  I sat tight and waited for the final sprint.  I jumped early on the last corner and just held-on, clawing back more valuable places.  With the crowds packing the streets and the Eurosport commentator calling my name, I felt like a professional!”

The UWCT Final selects the best amateur riders from a series of qualifying races around the world.  The event comprises nine races, based on age groups, each starting at 10 minute intervals.  Riders from 47 countries compete to win the coveted “Rainbow Jersey”, cycling’s equivalent of football’s World Cup.

“Racing so aggressively over 100 miles in your national jersey, against ex-pros on closed roads lined with large crowds, is an experience I won’t forget.  You never know, if I keep commuting to the office by bike, I might do even better next time!” said Bryan.