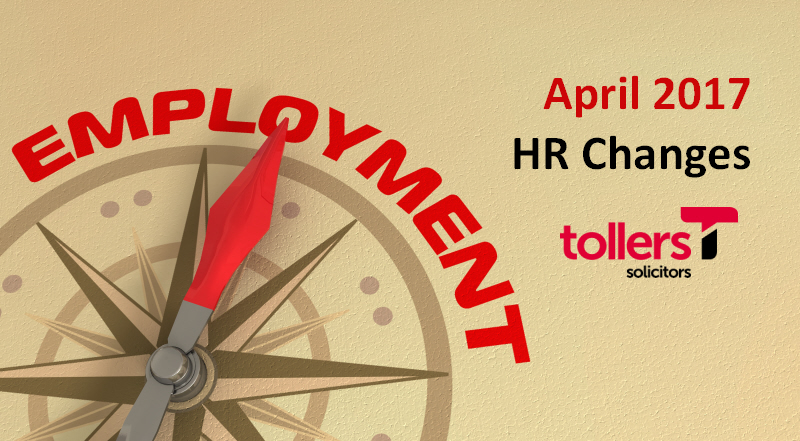 Changes tend to get made to the employment law landscape every April and 2017 is no exception. Here are a few of the main points to note for employers for up and coming employment law changes.

Larger employers, which are those with 250 or more employees, will have to report data about their gender pay gap. This will include reporting on bonus payments. They will also have to report on the proportion of male and female employees in different pay quartiles and those who actually receive a bonus. Employers have 12 months to publish the information on their own website and to upload it to government websites.

Employers that sponsor skilled workers under Tier 2 of the immigration points based system, will have to pay a levy of £1,000 per certificate of sponsorship per year.

The levy will apply in relation to each worker under Tier 2, but there are some exemptions. The Immigration Skills Charge is due to come into force on 6th April 2017. There are a couple of other changes affecting employers that employ workers under Tier 2. These are:

4. Tax Advantages under Salary Sacrifice Arrangements to be limited

Benefits attracting tax and National Insurance contribution advantages when they are provided under a salary sacrifice scheme are to be limited. This change is expected to take effect from 6th April 2017 with a few exemptions.

On 1st April 2017 the rate for the National Minimum Wage will increase despite an increase in most rates on 1st October 2016. The rate for workers aged 25 and over which is being called the National Living Wage increases from £7.20 to £7.50.

Members of defined contribution and high hybrid pension schemes will be able to take a tax-free amount of £500 from their scheme to take financial advice. The allowance is expected to take effect from 6th April 2017.

The weekly rate of statutory Maternity, Paternity, Adoption and Shared Parental Leave will increase to £140.98 for pay in the weeks commencing after 2nd April 2017.

The weekly pay that is awarded under the statutory redundancy scheme is subject to a maximum amount and this is expected to increase from 6th April 2017 to £489 from £479.

Employers that dismiss employees for redundancy must pay those with 2 years’ service an amount based on the employee’s weekly pay, length of service and age.

9. Limit on Amount of Compensatory Award for Unfair Dismissal

Here at Tollers, we will continue to watch developments closely and keep you informed. We will also be engaging with our clients to understand your business and personal needs going forward so that we are able to assist you in the future.

If you have any questions regarding the new changes and how to implement them then Talk to Tollers, we are HeRe for you.