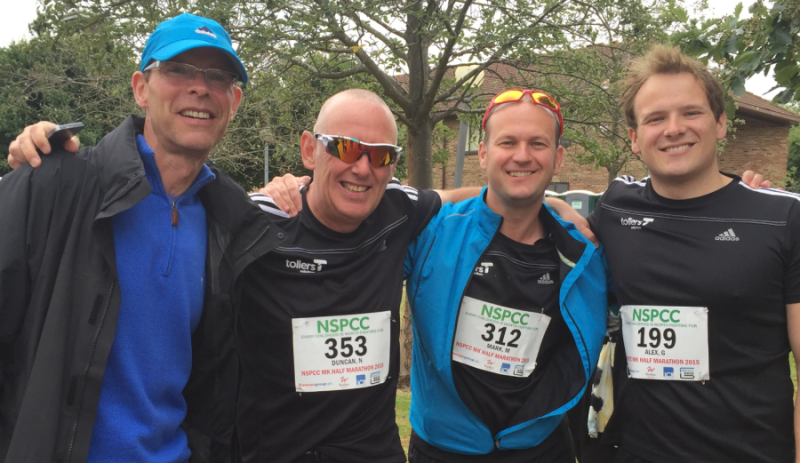 Tollers running team comprising of Duncan Nicholson (Managing Partner), Matthew Crosse (Corporate and Commercial Partner), Mark May (Head of IT) and Alex Greenwood (Trainee Solicitor) once again headed off on a rather overcast Sunday morning to participate in the NSPCC half Marathon to help raise funds to support the NSPCC’s Schools Service.

As in previous years the event was held at the Webber Independent School in Milton Keynes.

Tollers has entered a team in the race for the last three years and headed off to defend their title as Team Champions for 2013 and 2014 against fierce competition.

Matthew Crosse from Tollers said “As a regional practice, with an office in Milton Keynes we feel it is very important to participate in events such as this, we are passionate about getting involved in local community activities, especially one which does such important work. Tollers as a firm have participated for the last three years and we plan to participate for many more years to come”.

The marathon is in its 17th year and has grown from Strength to Strength, with over 850 individuals taking part, as well as 7 teams and 2 relay groups.

Team Tollers look forward to participating again in next year’s event and if they wish to win back their crown will have to get their skates on….