Services For Business
Services For You
Pages & News
Our Experts
Start typing to see results here.
You are here: Home > Employment Law > So We Are Out What Does This Mean For Employers

So We Are Out What Does This Mean For Employers 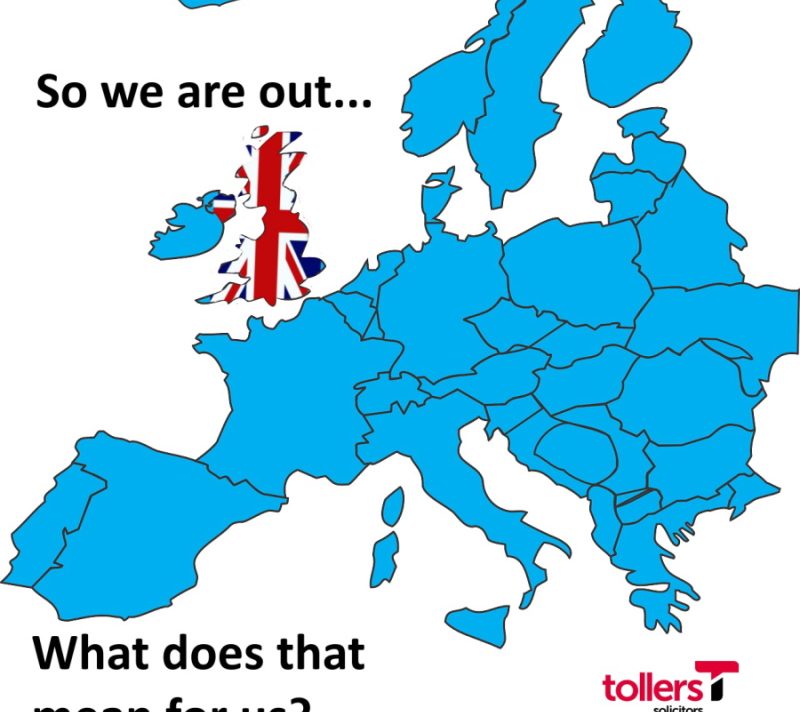 The Government will now be trying to negotiate a new trade relationship with the EU. The aim of this will no doubt be to allow British companies to sell goods and supply services to the EU Member States without restrictions whilst trying to avoid being hit by excessive tariffs.  This negotiation as we are hearing on the news, could take as long as 2 years.  Until the ‘divorce’ from the EU is finalised, we are still a Member of the European Union and therefore nothing will immediately change.

Depending on how the negotiations go and what we are able to agree with the EU, we can try to predict what may happen to the current EU laws that employers currently abide by. From a legal point of view all of the EU Directives have been adopted by the UK and implemented into our laws under Regulations.  These are UK laws and therefore will remain binding.  Any changes that we want to make to those will be for our Government to make themselves once the exit from the EU is finalised.  By way of an example, here are my predictions in respect of those current Regulations:-

As many of you will testify, these are unpopular Regulations.  We were required to implement them into our Regulations by an EU Directive but there is a possibility that these could now be repealed.

We have the Equality Act 2010, which prohibits discrimination.  This Act was brought in to consolidate already existing anti discriminatory legislation that we had in force.  Previous legislation was in force before the EU issued an Equal Treatment Framework Directive.  Therefore, given as these were in effect UK laws before the EU Directive it is possible that this will not be changed in light of Brexit.  There may however be scope to cap compensation for discrimination in an Employment Tribunal, as it was the EU who had initially forbade the UK from implementing a cap.

The UK has always been a champion of family friendly rights and the current rights that we have in place actually exceed those of the EU, for example, our ability to share 52 weeks parental leave.  In light of the UK stance on family friendly rights, it is possible that we won’t see any change in relation to those laws.

Whilst stemming from an EU Directive originally, TUPE now does form part of a UK Regulation and we updated this Regulation in 2006.  This update may have given TUPE its own protection and we could see it remaining in force.  However, we do have scope to make amendments to it and this could possibly include allowing employers to harmonise employment contracts post-transfer.

As with TUPE, this was an EU Directive which we implemented in the UK as the Working Time Regulations.  Like with family rights, the UK actually exceed the EU recommendation of 4 weeks paid annual leave by ensuring that UK companies pay 5.6 weeks.  In doing this, the UK has almost given the Working Time Regulations their seal of approval and so it is possible that these will also remain.  However, we would have scope to amend these Regulations if we wanted to so we could see a situation where rules for accruing holiday during long term sick leave or paying commission and overtime for employees on annual leave are changed and it is also possible that the maximum 48 hour average working week could be removed from the Regulations altogether, seeing as most employers tend to ask their employees to opt out of this anyway in practice.

Here at Tollers, we will continue to watch developments closely and keep you informed.  We will also be engaging with our clients to understand your business and personal needs going forward so that we are able to assist you in the future.

If you have any questions then Talk to Tollers, we are HeRe for you.