Services For Business
Services For You
Pages & News
Our Experts
Start typing to see results here.
You are here: Home > Tollers News > Inspired To Run 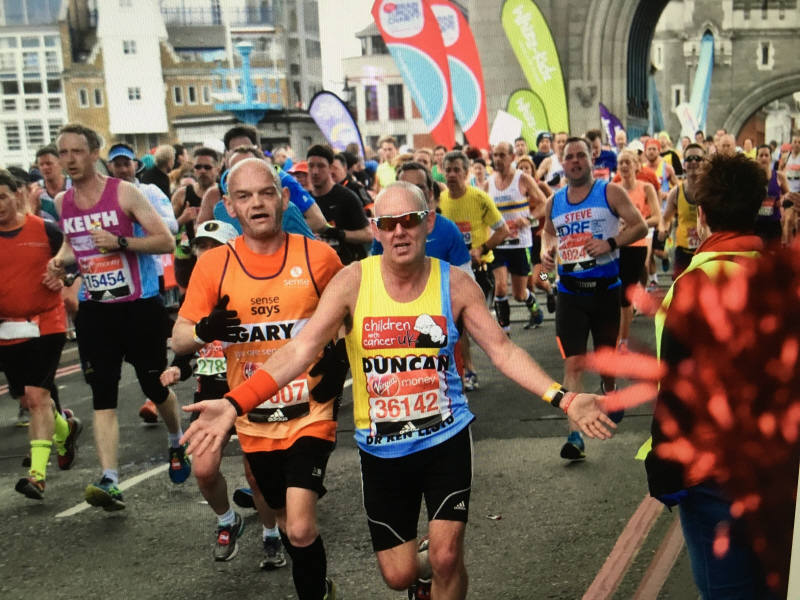 It has been a week since Tollers Managing Partner Duncan Nicholson ran in this year’s 2016 London Marathon, his strict diet has gone out of the window, he has succumbed to a few beers to celebrate (which are very well deserved) and his legs are beginning to feel like his own again.

It has been a week full of highs and lows, personal bests and planning for next year’s marathon…

Duncan set off this year with concerns as to his fitness having had an operation late last year that had set him back a little in his training. But he need not have worried, the London marathon is like no other race – from the moment he and his family arrived in a rather overcast and cold London until he finished the race in a Personal Best of 3 hours and 32 Minutes, the energy and enthusiasm of the spectators and other runners along the entire route, as well as the atmosphere in the city helped drive him on.

Duncan said “This year I was a little worried as although I had trained I did not feel as fit as I have in the past. The atmosphere in London was electric. This was my 4th London Marathon and I have to say it was the most enjoyable run yet – I ran at a steady pace from start to finish and the support from the crowds along the way kept me going – I actually felt euphoric and full of energy, despite having completed a 26.2 mile course”. 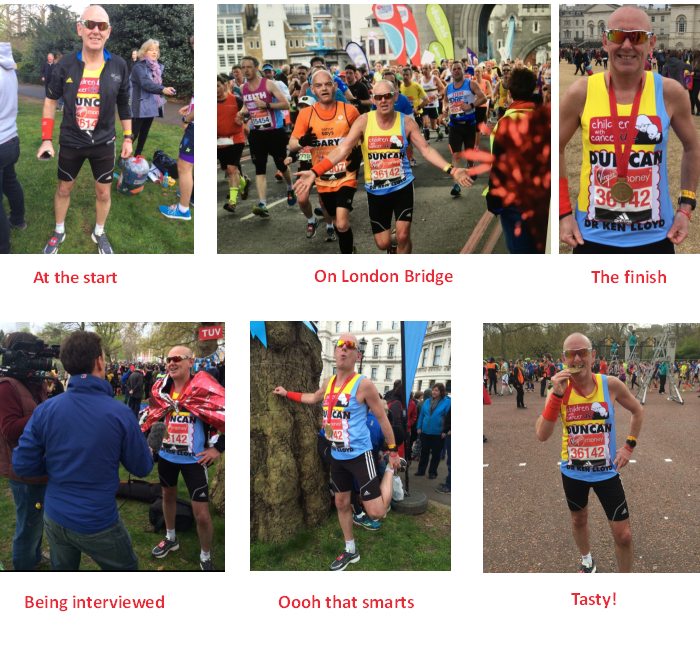 Duncan would like to thank everyone who sponsored him, cheered him on and helped him on this journey. This year alone has seen Duncan raise £2,410 for Children with Cancer and over the last 4 years Duncan has raised in excess of £15,000 just from his London marathon runs.

Duncan does not just run marathons for Children with Cancer he also takes part in Ride London 100 and various other sporting events to help… And in his spare time (some may ask does he have any time left!) he also organises fundraising events such as the infamous Nicholson Family Burns Night, which the family as a whole have been organising for over 20 years, with proceeds raised for numerous good causes including in recent years Children with Cancer. In total Duncan and his family have raised many tens of thousands of pounds for Charity.

Duncan had wondered whether this year’s race might be his last. However, the recent loss of Duncan’s doctor, Ken Lloyd, who cared for him when he was ill has left him resolved to give it one more go in 2017 in Ken’s memory.

“It is as important as ever for me to do what I can to assist others and raise funds for both sufferers and their families. Next year shall be all the more poignant in that I shall run to honour someone who made such a huge impact not just on myself and my entire family, but was also a guiding light into research and development of an illness that touches so many of us on so many ways”.

“I would also like to thank everyone who has supported me, friends, family and of course everyone at Tollers. Your continued support has been invaluable – here’s to 2017”.