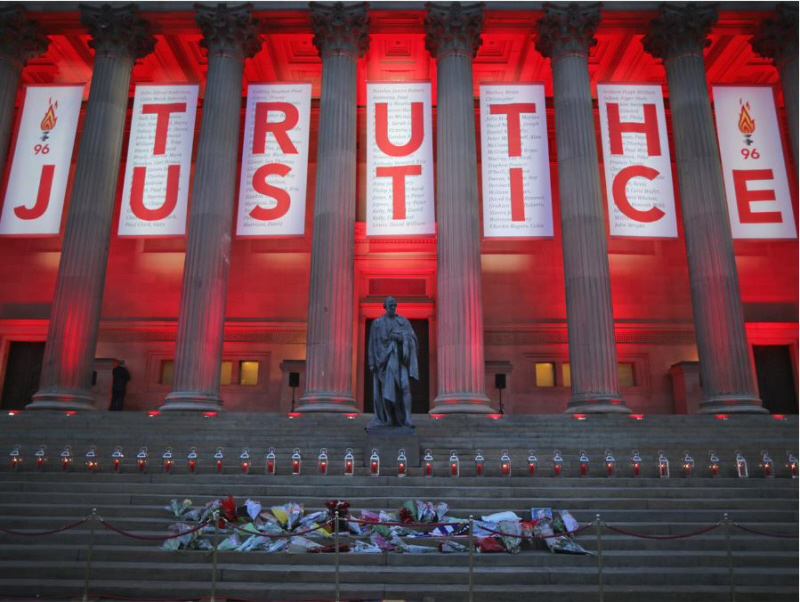 In context, Mr Bumble is trying not to take the rap for actions he is blaming on his wife. The morality is provided by his accuser Mr Brownlow who insists Mr Bumble must at least take responsibility for his wife’s actions.

We can learn much from literature, and we can learn too from history. We can learn more when the evidence of history is sifted and examined with a fine-tooth comb. Since a fateful day, the 15th April 1989, much has been learned about the events of that historical afternoon. In the initial stages, we learned about sensationalism with the Redtop press being wrongly and savagely critical of the Liverpool fans. After that came alleged collusion and falsification of evidence by the police to divert suspicion and blame from them onto the supporters.

An enquiry was set up and a report prepared by Lord Justice Taylor to investigate what had gone wrong and to lay down guidance for future safety measures in sporting venues. There was further scrutiny, but no new enquiry ordered when the 1997 Labour Government came to power.

Eventually, it was 2009 when,  after the 20th Anniversary of the disaster,  Andy Burnham,  the then Culture Secretary set up a Hillsborough Independent Panel to examine the evidence again. This was a major success for the Hillsborough Family Support Group, who had campaigned over the years for more scrutiny of the events and their work led to the setting up of the Panel. From here, progress was made, slowly but remorselessly through the investigation to the point where the Panel reported on 12th September 2012 and reached the conclusion that the disaster had been caused by lack of police control, that some of the deaths had been caused by the failure of the emergency services after the incident and importantly, that the Liverpool fans were not to blame.

The original inquest, which concluded on 26th March 1991, reached a judgement that those who died did so by way of an accidental death. The Hillsborough Independent Panel findings led to a second inquest which concluded on 26th April 2016. The second Inquest took over two years to hear all of the necessary evidence. The verdict this time was that of unlawful killing.

The families support and pressure group had wanted two things all along. Truth and Justice. In our society these are things we cherish, the right legal outcome, the right decision in the courts and the laws of the land upheld.

The story of Hillsborough has come full circle, from blaming the fans, to blaming the authorities. It is a case that has demonstrated the very essence of injustice and the rights of the common man ultimately being successfully proved against the might of the authorities. It is a tribute to the love the families have for their relatives and an exceptional journey within the belly of the English Legal System. The whole story, of tragedy, magnified hugely by injustice and leading to desolation before the return and emotional success within the legal process (never triumph, how could there be?), could be the stuff of a Hollywood blockbuster, but it isn’t. It is though, a journey of immense courage and application which shows that it is never too late to seek the justice that is rightfully belonging to an individual or individuals.

Many wrongs caused to people have to be pursued within a relatively short period to be put right. Most claims for injuries need to be pursued within 3 years, and contractual claims within 6 years. The Court does have discretion to extend the time for making a claim and where new evidence or a different decision at a second inquest, for example, would change the views of the lawyers involved in the case.

In the aftermath of the second inquest there have been renewed calls for justice, for prosecutions of those found to have caused the death of the 96 victims and for claims for damages for losses suffered by loved ones who lost a father, mother, husband, wife, son, daughter, brother or sister. Initially, the system did not appear to be working because of an alleged cover-up. Ultimately the system has delivered the right result.  There will be calls for that process to be made easier if it can be, but it did still deliver the right result….in the end.

These events have echoed loudly this week, but the story is not concluded. The families of the 96 will seek ultimate justice, and this will play out in the months and years to come.