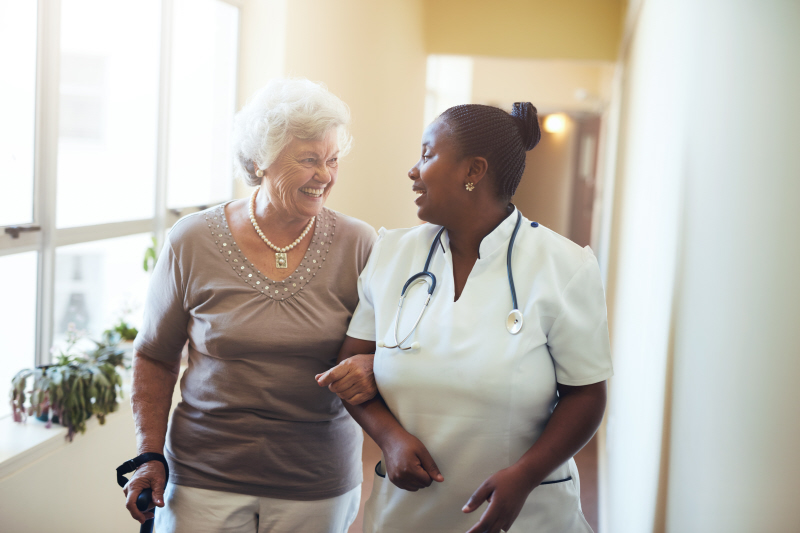 Mrs Ivy Butler, living with Dementia, had a needs assessment after a hospital stay. A Care Home was sought that matched Mrs Butler’s health needs and she was admitted to Priestley Care Home in 2012.

After only four days as a resident of the Care Home, Mrs Butler had a fall, fracturing her hip. Four months later she fell again fracturing her other hip. Because of these falls, Mrs Butler’s health needs increased, but her Care Plan wasn’t changed to ensure she had sufficient support. Mrs Butler fell many more times and suffered cuts and bruises to her face.

Mrs Butlers daughter also raised concerns about her personal care and hygiene. Mrs Butler’s family purchased an electric chair to provide support for her as she had a tendency to slump after her stroke. Due to the lack of support in regards to her poor personal hygiene, the chair had to be thrown away.

Mrs Butler’s weight was low when she was admitted to Priestley Care Home, her weight continued to decrease whilst she was under the Care Home’s care, however, no appropriate steps were taken to increase her weight. Mrs Butler’s family raised concerns about meals being missed by Mrs Butler because she was asleep, but there were no steps taken by the Care Home to ensure her nutritional needs were met. There was no referral made to a dietitian to investigate how best to support Mrs Butler to maintain and put on weight.

Mrs Butler was finally assessed as needing the support of two carers when mobilising and using the toilet, it was confirmed that she was not to be left unsupervised during mobilisation. On a visit to the toilet with two carers, she was left alone causing her to fall, fracturing her pelvis and cutting her head. Mrs Butler was taken to hospital by ambulance. Mrs Butler’s family were involved in the subsequent Safeguarding Investigation into the incident and they raised concerns about the poor quality of care Mrs Butler received at the Care Home. The Safeguarding Investigation upheld the fact that Mrs Butler had been left on her own causing the fracture to her pelvis but did not investigate adequately the other concerns the family raised about the level care and support provided.

During her stay from 2012 to 2014 at Priestly Care Home it is very clear that Mrs Butler’s risk of falling had not been adequately assessed and an appropriate Care Plan was not put in place. Concerned daughter Mrs Susan Butler instructed Veronica Male, a Care Home Abuse and Neglect Specialist at Tollers to investigate a potential claim against Priestley Care Home. Mrs Butler’s daughter wanted to bring the claim to make people aware of the poor care in the Care Home but also the difficulties the family faced when raising concerns about the various incidents of poor care.

Veronica initially wrote to Priestley Care Home, advising them of the claim against them, in accordance with the rules. Veronica then sent a formal letter of claim. Unfortunately, there was no response to any of these letters and so Veronica resorted to emailing the contact address for the Care Home requesting a response. This was not acted upon and it was only when threatened with reporting their failure to communicate and provide documentation to the Information Commissioner, did they then refer the matter to their insurers and then their solicitors. The solicitors disclosed the Care Records and then made an offer to settle the claim. A Barrister’s advice was taken on the offer and the Barrister recommended acceptance of the offer.

Mrs Susan Butler, who claimed on behalf of Mrs Ivy Butler’s Estate was happy, money would be available to put gravestones on her grandparent’s graves. Mrs Susan Butler was not concerned about how much money the claim produced, it was far more important that the Care Home be held accountable for the poor quality of care her mother received.

Mrs Susan Butler says: “Tollers have been absolutely amazing, I can’t thank them enough! I turned to 6 other solicitor firms but they wouldn’t take the case. I just wanted to get justice for my mum. I am so glad I did it, my friends told me to let it go, asking what I was hoping to gain, but I knew what my mum would have said and my dad if he was alive, they would have said it’s not right. There were 40 other rooms in the care home with other residents, I had to do something.”

Mrs Butler has advice for those who suspect something is not quite right: “If I could talk to others in a similar situation I would say: if your gut feels there is something wrong, listen to it. Don’t feel like you are being over anxious, do something. All I wanted was for my mum to be cared for, at the end of the day it is your relative. Go at different times of the day, speak to other residents and their families.”

Speaking about Veronica Male, Mrs Butler says “Veronica was so good, she rung me and kept me informed throughout the case.”

If you have concerns about the level of care your loved one has received then Talk to Tollers call 0333 414 9123 in confidence.